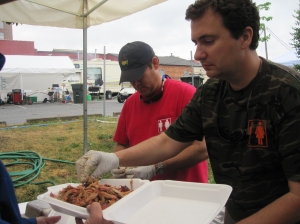 Mustard based, ketchup based, vinegar based, sliced, pulled, chopped..Regardless of your preference, BBQ is a southern delicatessen that we learn to appreciate and savor at an early age. From football tailgating to a wedding shower, there is no occasion too formal or casual for a little BBQ.

It wasn’t until I went to college…well maybe even after college…that I realized there are so many types of BBQ. Growing up in eastern NC, we had pulled pork with a vinegar based sauce. That was nonnegotiable. You can’t find anything else in the eastern part of the old Tar Hill state. (My favorite is Kings BBQ in Kinston). And I have to admit, I am not sure that even now I recognize anything else as BBQ. Why would you cover the delicious smoked pork with a bunch of thick sweet or even spicy sauce? I can remember frequently attending Pig Pickins where we really did pick meat off of a whole pig. I don’t think I have had the opportunity to pick a pig since I left ENC.

Ya know…if I ever had the opportunity to open a restaurant in France, I think I would open a BBQ joint. The french

have most cuisine really figured out, but when it comes to BBQ…they don’t know what they are missing. Serve it up with a little baguette and finish off the meal with a little creamy camembert…I think I am on to something. If this marketing gig doesn’t work out, you might find me in southern france teaching the frogs about pig!

Anyway…Gville hosted its first BBQ Cook off this weekend as a benefit for Project Host. A few years ago C and H bought a huge cooker from TX. They formed a team: Too Bad You’re My Cousin. Though C. no longer participates in the team…we still enjoy going to the competitions and sampling the pig! For this competition, they had to cook extra BBQ to be sold to the public for Project Host. 24 butts to be exact…to put this in perspective, that is well over 100 lbs of BBQ and someone has to pull all of that pork.

It’s a bit strange, but I really enjoying pulling pork so I volunteered to help. I’ve never officially pulled at a competition. So I woke up bright and early saturday morning and pulled pork for about 2 hours…sampling a taste here and there! I’m not sure I have ever seen so much Q and I certainly have never been around to see the Q go to the judges. So fun…and for a great cause.

And that was just the beginning of Pig for the day…we went to a BBQ and Beans party Sat night!  I think I may need to take a break from pig for a while. Afterall,,,you are what you eat! 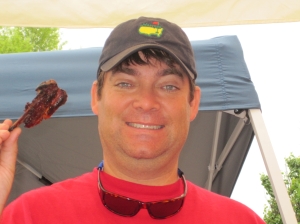