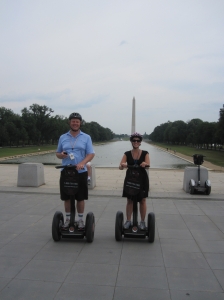 Life is definitely about perspective. Yesterday I reflected on how different Washington, DC seemed based on my own life perspective- as a teen, as a young adult and as a 30ish career girl. So to continue with this basic theme, I decided to take a look at the city from yet another perspective…from the wheels of a segway!

After several days of conference seminars, it was time to hit the city. I found a willing partner in crime and we headed out for a tour of the city. We had a great instructor who showed us the basics. Pink helmet on my head…looking very sporty, I must admit I felt a little intimidated by the two wheels vehicle. I heard all of the bad stuff that could happen if we leaned the wrong way or went too fast…Yikes. But I reminded that I had seen many many old folks touring around cities on these vehicles.

Do you remember when segways were unveiled? I remember the announcement being made on the today’s show (2001). Matt Lauer announcing to the world that these new vehicles would revolutionize the way we Americans and the world traverse to and from work, around cities, etc.  Guess that prediction was wrong. You may see a few tourists and a policeman or two cruising around on these things, but that’s about as far as this revolutionizing phenomenon goes.

Back to my adventure…I hopped on the segway and began circling our little area. Not bad. Not too hard. Actually the hardest part was getting on and off. My new friend, a Scottish gent, and I scooted all over the city, visiting all of the major monuments.  We had a BLAST. The segway tour is a MUST for any big city.

We visited the WW II memorial and the Roosevelt memorial- a first for me. When I lived in DC, the WW II memorial was quite a controversy. Many were vehmently opposed to the location, fearing it would interfere with the view from the Lincoln Memorial to the Washington Monument. I have to admit, it does interrupt the veranda…but in a fabulous way. I think the memorial is a beautiful tribute to those who served our country.

A fun adventure with a new friend. I highly recommend the segway tour!